The End of the Transatlantic Dialogue

This will be the last post on the blog. As of February 1, I am no longer working at the IISS.  I can say with confidence that the dialogue was successful in bringing together a diverse group of experts to discuss how climate change will affect a broad range of security threats.  We held workshops on water, food, and energy security. We held larger conferences to bring the debate outside the experts, in both Washington and Brussels.

We delivered our report (PDF) to the European Commission at the end of January. With the completion of the report, my time at the IISS has come to an end, and I have moved on.  If you are looking for updates on me, take a jump over to my personal website at www.andrew-holland.com.  I will also continue my blogging at www.revolutionarytransitions.blogspot.com. I will continue to look at how climate change affects security, but I will also write about the broader changes that the earth and human society are undergoing. I hope that you will update your RSS feeds and your bookmarks.

Finally, if you are looking for the most up-to-date analysis of global affairs from the IISS, I would direct you to the IISS voices blog, which should be your first stop for any global security issue.

Thanks go out to all who participated in our events; it would not have been a success without you.  Thanks also to everyone who followed this blog from its inception to its closure. I really believe that blogging is the best way to reach a large and connected audience around the world.  Thank you.
Posted by Andrew at 8:46 PM 0 comments 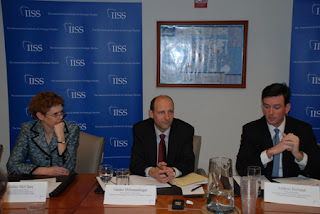 Event Advisory: “The Results of the IISS Transatlantic Dialogue on Climate Change and Security”

Next week, on Wednesday, I will be presenting the results of the IISS Transatlantic Dialogue on Climate Change and Security at the IISS's US office here in Washington. Esther McClure, a Strategy Action Officer for Energy and Environmental Policy at the Pentagon. The discussion will be moderated by Günter Hörmandinger, the Coundelor for Environment from the Embassy of the European Union.

The event will begin at 4:45 pm on Wednesday, January 26. It should be an interesting discussion that will hopefully highlight some of the areas of differences and for cooperation in the approach of the US and EU to climate and security policy.

Climate change is at the heart of both national and collective security.  The earth is unequivocally warming, and no matter what action is taken to reduce global greenhouse gas emissions, that warming is very likely to continue for at least the next 30-40 years. This discussion will focus on the role security planners have in preparing for a warmer climate, so that the impacts of climate change – like sea level rise, changes in water resources, or food shortages – do not fuel conflict.

On another note, this will be my swan-song with the IISS. As this program comes to an end, my time at the IISS will also come to an end.

There is still room available. To join us at the event, please RSVP to events-washington@iiss.org.  I am looking forward to a good discussion with our panelists and our participants.

Next week, I'll post details of what will happen to this blog after I've left the IISS. I will also post the link to the report, when we put that up on the IISS' website.
Posted by Andrew at 5:36 PM 0 comments